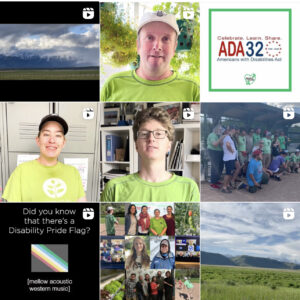 One of the highlights of the summer was filming employees sharing their thoughts about Disability Pride and the ADA Anniversary. Over 15 employees participated in our shoot! Check out the results on our Instagram! We’ve been getting more and more into “reels.”

Disability Pride initially started as a day of celebration in 1990—the year that the Americans with Disabilities Act (ADA) was signed into law. That same year, Boston held the first Disability Pride Day. The first official celebration of Disability Pride Month occurred in July 2015, which also marked the 25th anniversary of the ADA. Since then, cities across the country have celebrated disability pride month with parades and other festivities.

Disability Pride Month celebrates disabled persons embracing their disabilities as integral parts of who they are, reclaiming visibility in public and interacting fully with their disabilities out in the open, and rejecting shame and internalized ableism. It is a time for the disability community to come together, uplift, and amplify one another’s voices and be heard. Disability pride has been described as “accepting and honoring each person’s uniqueness and seeing it as a natural and beautiful part of human diversity.”